ENSLAVED TO HEADLINE “ARMY OF THE NORTH STAR” SCANDINAVIAN TOUR 2018 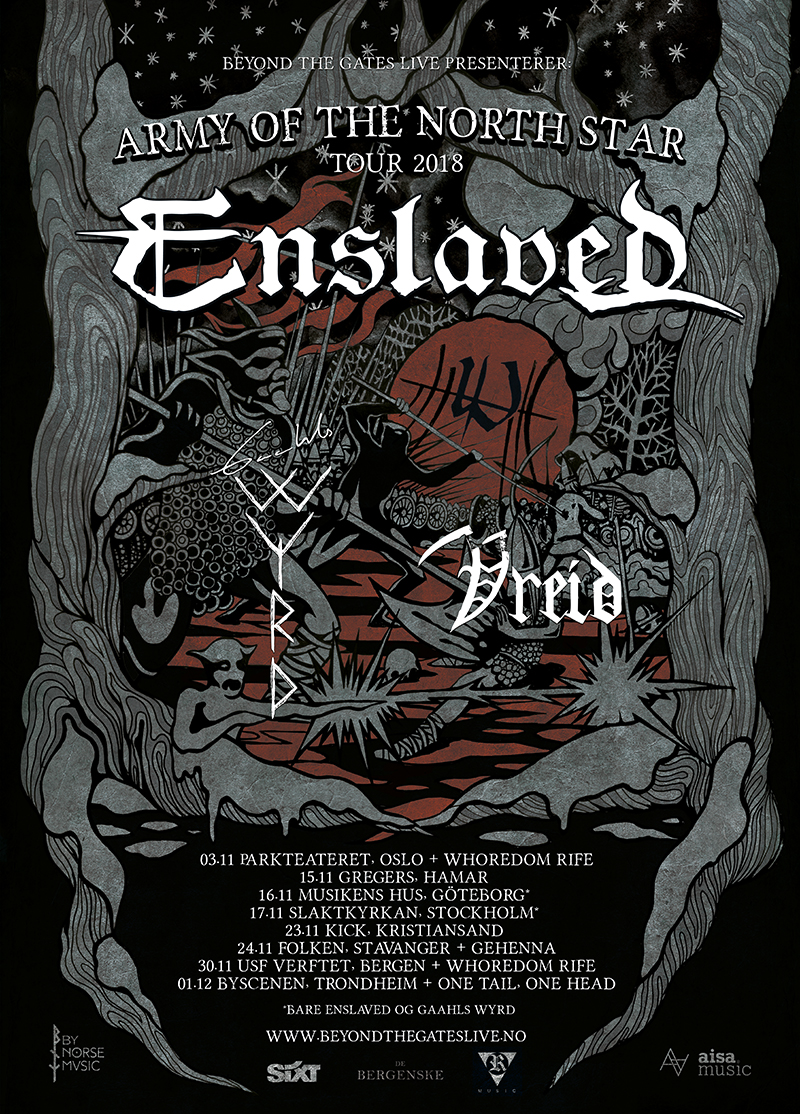 In November 2018 Beyond the Gates will host the spectacular “Army of the North Star Tour 2018”!

We will have the honor to headline this all Norwegian package, joined by very special guests Gaahls WYRD and Vreid. The trek will be supported by a variety of bands along the route, including Whoredom Rife, Gehenna and One Tail, One Head.

We have forged a very special bond with Bergen-based festival Beyond the Gates. Last year’s edition saw us perform our debut album “Vikingligr Veldi” for the first time live in its entirety, leaving fans and critics equally stunned. For this year’s festival, we will do an exclusive performance of our classic album “Frost”! The “Army of the North Star Tour” will see us re-imagine some of our early material, bringing it to life with the experience and craftsmanship of our current incarnation. The set will be paired with songs from our new album, “E”!

Grutle comments:
“Hi metal maniacs, prog heads, lovers of heavy music or whatever pleases you to be addressed as. We have, yet again, some good news! We have more live shows to announce; we are once again coming  to our beloved c**** in Australia to stir up some shit down under, we are  ready to make some thunder in the east with our 2nd visit to Japan and we’ll wrap up a fantastic year with a bunch of gigs in Scandinavia together with our buddies in Vreid and Gaahl’s Wyrd. Simply psyched!!!”

Beyond the Gates manager, Torgrim Øyre adds:
“I think it’s safe to say that Enslaved knocked everyone sideways last year when they did the “Vikingligr Veldi” album in its entirety at Beyond the Gates. It was a remarkable experience hearing how well this material came across performed by the band with some 20 odd years of added experience. They managed to maintain the spirit of the songs adding a new level of finesse and emotion to it all. Enslaved has always been a band pushing forward, creating new textures and colors to their songs. Their most recent album “E” is a great testimony to that. I can’t wait to get this show on the road and show everyone what 25 + years of Norwegian metal history can manifest in.”

CATCH THE “ARMY OF THE NORTH STAR” EARLY BIRDS TICKETS!

You can now purchase the Early Bird Tickets for most of the shows before the official tickets sales goes live on Friday! Links below:

*Only Enslaved and Gaahls WYRD