WE ARE CELEBRATING 25 YEAR ENSLAVED WITH A SERIES OF EXCLUSIVE, COLLECTIBLE MERCHANDISE DESIGNS, SHOWS AND SPECIAL PROMOTIONS! 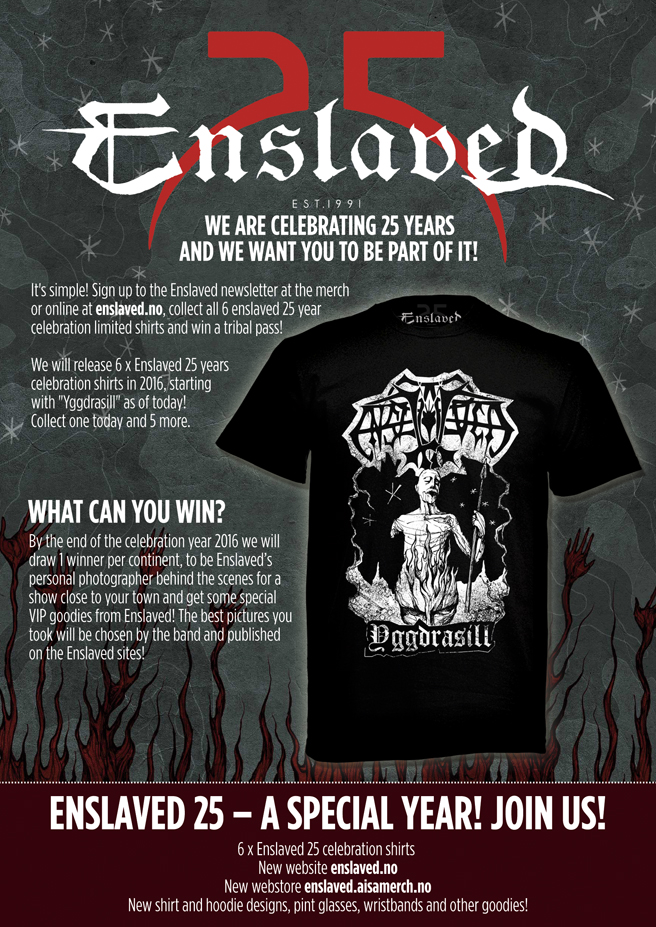 Welcome to our new home and webstore.

We were lucky enough to have retained Costin Chioreanu of Twilight 13 Media to create a unique design and brand for Enslaved 25, including the new webstore design. This unique merchandise will only be available at the official Enslaved webstore and at these two live shows coming up: Oslo on February 25th and Bergen on March 12th to celebrate the Norwegian kick-off for Enslaved 25 years.

Since the anniversary celebration — which internationally kicks-off with the London By Norse event in March — will run to the end of the year, you can look forward to special pieces being added to the collection including designs by Trine + Kim Design Studio, Norwegian tattoo artist Jannicke Wiese-Hansen, Costin Chioreanu and others. Merchandise will include items such as zippered hoodies, wristbands (coming soon!), pint glasses, CDs, vinyl and more to come!
How do I win a Tribal Pass?

The launch features promotions that will roll out a series of 6 Enslaved 25 celebration shirts (each tied to a chronological period in the band’s career). A new design will be made available approximately every two months starting with ,Yggdrasill, today.

Each design will be limited to 200 copies worldwide and will feature the special “Enslaved 25” tag.

Collect all 6 Enslaved limited Shirts and sing up to the newsletter!
What can you win?
By the end of the celebration year 2016 we will draw 1 winner per continent to be Enslaved s personal photographer behind the scene for a show close to your town and get some special VIP goodies from Enslaved! The best pictures you took will be chosen by the band and published in the Enslaved sites!

, We have been around for 25 years now. Not only have we “survived” without any breaks; we have worked non-stop on developing as a band and artists. The first thing we do to celebrate is to re-launch our website www.enslaved.no. With the help of Romanian multitalent and visual artist extraordinaire C. Costin, the site presents the visual side of what, where and who we are today – 25 years after forming the band.

We are also thrilled to mark this milestone by launching our own new shop. We are honored to have some of Norway’s finest visual artists, and friends of ours; doing the first new designs found there. Jannicke Wiese Hansen, who drew our two first logos back in the day, has come up with two stunning designs in her characteristic Norse/ mythological style. Trine & Kim, one of Norway’s leading design teams and innovators within Metal artwork for one and a half decade now, has lent us their talent for a shirt and a hoodie design. Finally, it wouldn’t be complete if the aforementioned C. Costin did not make merchandise also for the grand opening: he has designed the first of 6 limited edition 25 year anniversary shirts, re-interpreting releases and their visual profile.

It is highly motivating to be in a position where we can reinvent and develop visually and conceptually in addition to the musical exploration, and we hope you enjoy it as much as we do. A big thank you to Simon/AISA & team and the artists for making this such a good looking celebration for the band. Ok, time to back and rehearse all those 25 year sets!’ – Ivar

We encourage you to stay informed by signing up for our newsletter. News announcements will include exclusive information about upcoming merchandise and design availabilities, as well as promotional contests and chances to win rewards like tribal passes for collecting all six designs, and VIP experiences with the band.